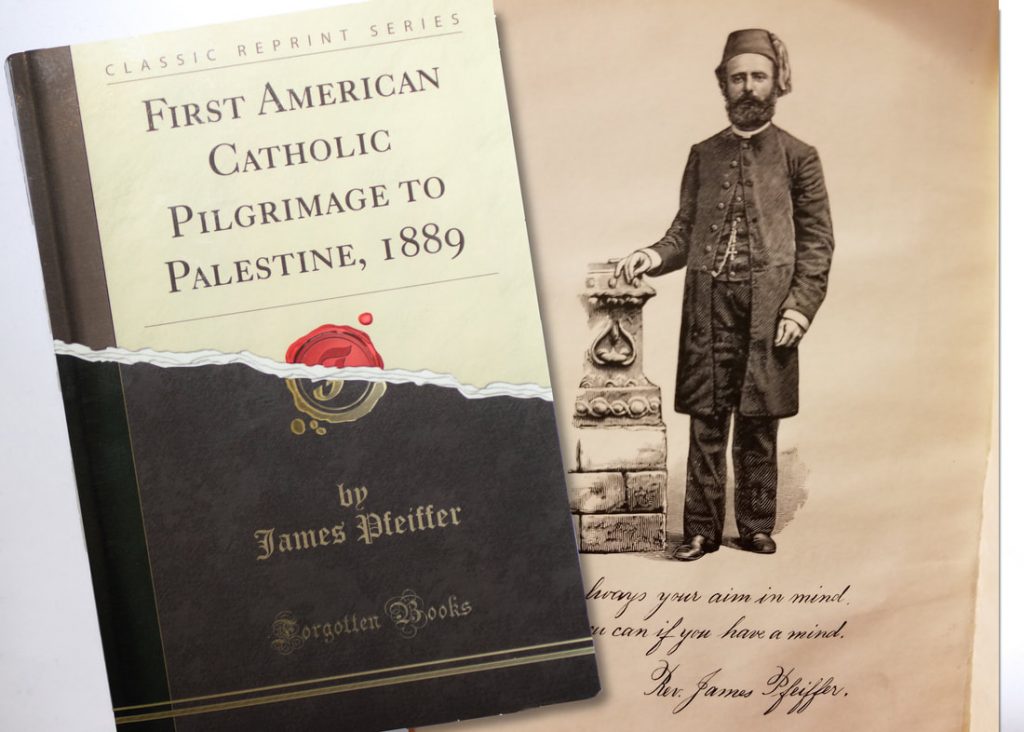 Photo Courtesy, Franciscan Holy Land Gift Shop
I was blessed to receive the First American Catholic Pilgrimage to Palestine, 1889 (Classic Reprint Series) written by Reverend James Pfeiffer, from the Franciscan Holy Land Gift Shop.  This is my fair and honest review but you’ll see, the stories were so moving and details so vivid, it morphed into more of a journey with the book.  One, I hope you will take a few moments, to take with me.
​
I was very curious to dive into this book, to explore some of the similarities and differences from a pilgrimage today compared to the visiting the Holy Land in 1889. While I have never been to the Holy Land, it has long been of interest though I have been unsure from fear born from ignorance and my own anxieties.  Lately, I have to admit with some unexpected excitement, signs recently have been pointing towards a possible Holy Land pilgrimage.

So armed with this incredible first hand account and with my own limited knowledge of the Holy Land, let’s dive in and take a step back in time to the first American Catholic pilgrimage to the Holy Land.
The book begins with a log of the people included in this first American Catholic pilgrimage. I was amazed and pretty thrilled to find one Miss Carrie Cantwell from the city where I was born and part of my very own diocese!  It gave me an unexpected kinship — a Catholic connection — to those who took this historic trip over 130 years ago!
As I journeyed along this insightful 268-page tome,  I often imagined the holy sites through the eyes of this kindred pilgrim. If Miss Carrie could travel by steamboat, carriage, and foot to spend 6 months abroad in very unknown territory, I can certainly consider following her her footsteps, albeit via a comfy flight, luxury bus, and for only 11 days or so. 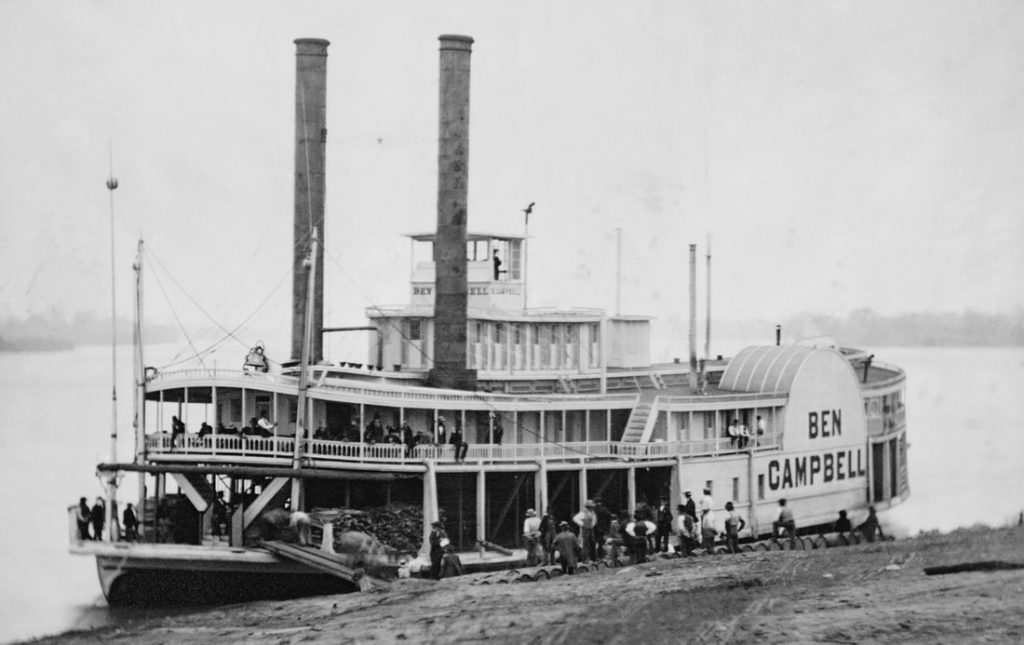 Just a short note about how this momentous trip began. They were first in Italy, specifically Assisi,  where St. Francis, the founder of the Order of Franciscans, was born. Which is a super interesting connection because, “800 years ago, the Roman Catholic Church entrusted the guardianship of the Holy Land and other shrines of the Christian religion to the Order of St. Francis, creating what is now known as the Custody of the Holy Land.”

The Holy Land Then and Now

Let’s take a look at Five Special Places in the Holy Land,Reverend Pfeiffer and his fellow pilgrims visited. These encounters will barely scratch the surface of what this book had to offer. First, the pilgrims spent months on this pilgrimage and second, the book is a 268-page account of their travels. Reverend Pfeiffer looks not only at the itinerary and locations visited on their trip, but gives some of the rich history of the Holy Land, and his own personal encounters with the locations.

I also really love how much scripture Rev. Pfeiffer includes throughout the narrative. As I have often read from people who have visited the Holy Land, being in the Holy Land brings the Bible to life. And others have said you will never read the stories in Scripture the same way once you have walked in Jesus’ footsteps.
​
What a gift to have this travelogue from such a historic moment in Catholic history.

Beginning the Journey in Jaffa

Jaffa, also known as Joppa, the southern and oldest part of Tel Aviv, is an ancient port city in Israel,“where the pilgrims generally entered the Holy Land. It is about 40 miles southeast of Jerusalem, and passes for one of the ancient cities in the world.”

Jaffa is where Noah built the ark, it is from there. Reverend Pfeiffer tells us, “the apostles went forth into the different parts of the world to preach the gospel”.  The pilgrims first traveled throughout the Holy Land in light carriages. Reverend Pfeiffer laments a railroad being created after his visit and adds, “I would also rather have taken a train to Jerusalem and other places then fall off donkeys or be tossed around on those wagons to Jerusalem.”

Perhaps, I should cease my complaints about being occasionally carsick. 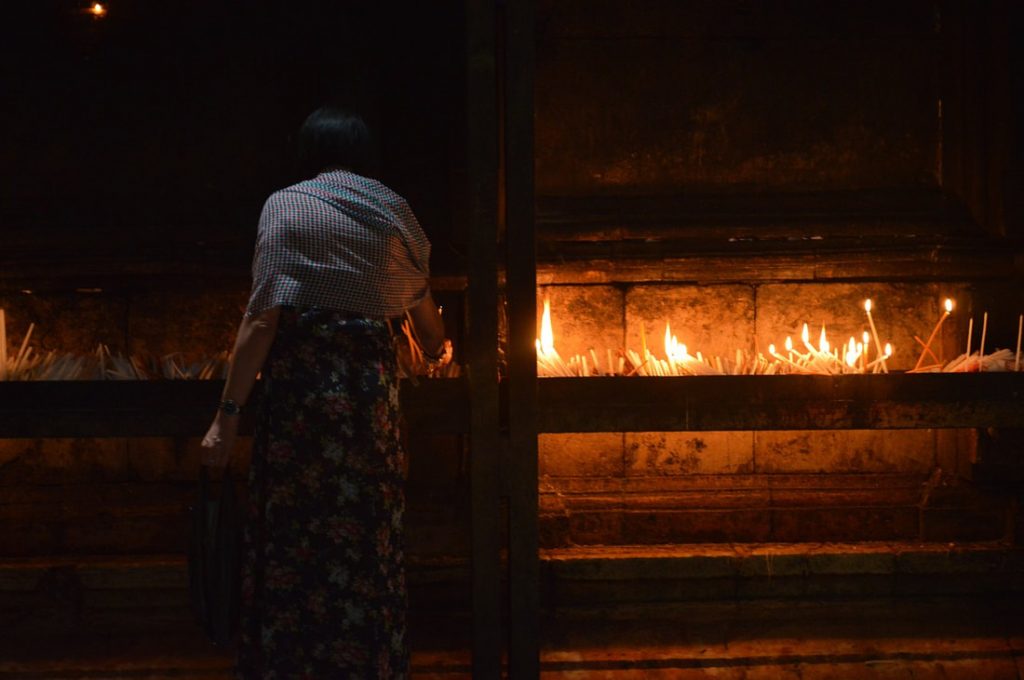 ​The Holy City of Jerusalem

Reverend Pfeiffer chronicles that during their time in Jerusalem, a Franciscan priest and Bro. Bernardin showed them the Church of the Holy Sepulchre.  He gives such great detail into the interior of the this holy place. As you read each descriptive word it is as if you could have been transported back to 1889 standing amid these first pilgrims taking in the same grand sites.

The chapel, is built over the grave of Our Lord, and is built “of polished native yellow-stone”, which one can still visit and venerate. Consider the number of pilgrims from all over the world, who have made the trek to this holy place just to touch the place where Jesus was laid to rest after his crucifixion.  The spot from which he rose!!

Also documented in his visit to the Holy Sepulchre was the ancient Holy Fire ceremony performed on Holy Saturday. This continues to this day, but I pretty confident in my understanding it now celebrated in a much more orderly fashion.  Rev. Pfeiffer speaks of the chaos of that moment as pilgrims attempt to get the Holy Fire from the Patriarchs and spread it as quickly as possible, “others tried to get fire from these [Patriarchs] and in the great confusion, some set fire to their clothes and even their beards, causing the greatest excitement and confusion ever seen, despite the 800 soldiers who were present to maintain order.”

The Way of the Cross, Via Dolorosa

​On Good Friday, the pilgrims Reverend Pfeiffer tells us went the Way of the Cross, Via Dolorosa, which is the streets of Jerusalem. They participated in the Stations of the Cross along the route, and one of the coolest details, the last 5 stations are within the Holy Sepulchre Church.

Reverend Pfeiffer recalls how touching the ceremony was on that Good Friday physically present at Calvary. On the very spot where the Crucifixion took place. He recalls one of the subdeacons held a cross on which was fixed a corpus. Reverend Pfeiffer said he’d never seen such a beautiful ceremony.

On Good Friday, Pilgrims visiting the Holy Land can Commemorate the Passion at the Holy Sepulcher.

An Historic Visit to The Dead Sea

The Dead Sea is about 40 miles long from north to south and according to Reverend Pfeiffer, “it is where once stood the cities of Sodom and Gomorrah”. The pilgrims of 1889 actually tasted the Dead Sea, you would be lucky to get this germophobe girl in the water. Though I have read of the phenomenal health benefits of a Dead Sea mud!

Surprisingly, he describes putting the Dead Sea water “into a tumbler and it was clear as any other water would have been”. He talks of the few people brave enough to swim in this water, amazed at the buoyancy more so than any other sea they had ever experienced.   From there the pilgrims went on to the River Jordan where Jesus was baptized.

As I look at the agenda itineraries for many of The Franciscan Holy Land pilgrimages, it is exciting to contemplate the possibility of visiting of swimming in the Dead Sea and touching the very water Jesus was baptized in.

The more I read of Reverend Pfeiffer’s experiences in the First American Catholic Pilgrimage, the more I feel a desire to put aside my fears and worries [which I will note EVERY SINGLE person I know who has gone to the Holy Land has told me are completely unfounded], and make this life-changing, spiritual journey.

Highly Recommend this Book
​
Whether you have considered a holy land pilgrimage or not, I highly recommend this historic, unique, and fascinating travelog that every American Catholic should add to their library.