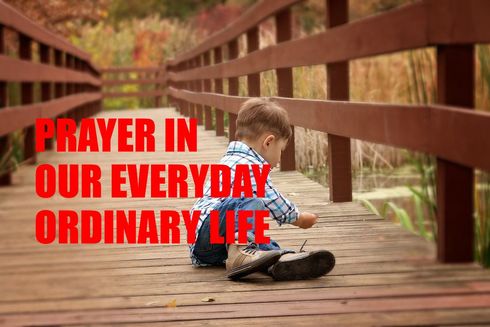 5 Types of Prayer for Everyday Use

Every Lent, I spend some time contemplating how I might devote more time to prayer, fasting, or almsgiving. These habits I work on throughout these forty days of Lent have had remarkable sticking power in the past.  Even though I pray every day and often, I wondered if learning more about prayer would help me pray better.  So, this Lent I am revisiting lessons from the Catechism of the Catholic Church on the five types of prayer.

The Time Before I Thought to Talk To God

Eleven years ago, my dear friend and convert to the Catholic faith, introduced me, a cradle Catholic, to a remarkable book: The Catechism of the Catholic Church (CCC). Karen was (and still is) the first and only person I have ever meet, who read The Catechism from cover to cover – all while on a family vacation. Although I primarily use this book as a research resource; Part Four on Christian Prayer garners a great deal of my attention.

Prayer had never been a natural part of my life, aside from the Rosary my mother made us pray during thunder storms and the occasional “Now I Lay Me Down to Sleep” as a child before bed.

Armed with this new knowledge about prayer, my relationship with God rose to a height I never imagined possible.  The strengthened relationship came from discovering the five types of prayer presented in the Catechism.  Each one represented to me new opportunities to enter into a dialogue with God.  While I was aware of petitioning God for favors such as help out of the pending speeding ticket as the officer approached my car, the idea that I could bless, praise, or adore him was not part of my prayer vocabulary.  Even the fullness of intercessory prayer eluded me; my immature faith understanding put a limit on the number of prayers God would answer so I tended to hoard them.   Overall this was fine as I did not travel in circles where people went around readily asking for prayers; never mind the notion of turning to saints for intercession.  Saints were holidays – Valentine, Patrick, and Nicholas – not heavenly helpers.

Thanks to my friend, and her simple book recommendation, I discovered these five types of prayer; and this Lent, I am revisiting them to continue strengthening my relationship with God.

Yes, Even You Can Pray

Blessing is the conversation we have with God that foremost acknowledges Him as Creator and Sovereign King. We bless the One from whom we know all blessings to flow. Furthermore, we recognize every moment of our being, and all that it may encompass, is gift.  The Catechism reveals there are two forms of action associated with this prayer.
Two fundamental forms express this movement: our prayer ascends in the Holy Spirit through Christ to the Father – we bless him for having blessed us; it implores the grace of the Holy Spirit that through Christ from the Father – he blesses us. – CCC 2627

As I read about this continual ascending and descending of grace, prayers, and blessings between us and God, my mind formulated the strangest parallel.  The 1980’s primitive video game, Pong, with its small rectangle paddles and pixelated moving dot, popped into my mind.  I remembered the difficulty of the first few times I played. After I’d played a few hundred times, however, the volley became increasingly easier, and the game lasted much longer. Similarly, The more we practice blessing and adoring God the more continual this movement from Heaven to earth and from earth back to Heaven.

Next we will look at the one probably most familiar types of prayer: the asking, sometimes maybe even begging, for something from God.  If I am honest, I did not expect to learn anything new from the Catechism with regard to the prayer of petition. Ever since my first math exam, I had figured out pretty quickly how to seek the Lord’s help in my life.  Only a fool believes she has God’s ways all figured out, because just three paragraphs in, I read this:
The first movement of the prayer of petition is asking forgiveness, like the tax collector in the parable: “God, be merciful to me a sinner!” It is a prerequisite for righteous and pure prayer. A trusting humility brings us back into the light of communion between the Father and his Son Jesus Christ and with one another, so that “we receive from him whatever we ask.” Asking forgiveness is the prerequisite for both the Eucharistic liturgy and personal prayer.- CCC 2631
Forgiveness is “prerequisite,” which means that it is required as a prior condition for something else to happen or exist.  At first glance this confounded me.  The more I thought about the need for forgiveness first before other requests of God, however, it become much clearer to me.  How utterly arrogant of me to think I can do whatever I please and then approach the Almighty God for a favor or blessing!

Being a mother of three has given me an interesting insight into the necessity of seeking forgiveness before offering a prayer of petition.  My darling children have all had their moments when self-absorption or self-interest have gotten in the way of their good judgement or behavior.  They have all had their turns of ignoring my commands, skipping out on obligations or duties, or failing to help around the house.  Oblivious to the consequences of this behavior, these same children have come petitioning for rides, money, or help and are perplexed by my denial of their requests.

The motive for my holding back is to teach them a lesson to protect them from believing that behavior is acceptable. I want to train them to be the best version of themselves. My decisions, whether they see it this way or not, are always for their good.  It always astonishes me how much of a child I really am in light of my faith and relationship with God the Father.  How often I got about my everyday life ignoring God’s commands, dismissing the Spirit’s promptings to serve others, yet I fully anticipate an outpouring of answered prayers when I approach him.

Since Abraham, intercession – asking on behalf of another has been characteristic of a heart attuned to God’s mercy. In the age of the Church, Christian intercession participates in Christ’s, as an expression of the communion of saints. In intercession, he who prays looks “not only to his own interests, but also to the interests of others,” even to the point of praying for those who do him harm. – CCC 2635

In 2007, my husband talked me into joining Facebook. I quickly found that I fell into temptations of gossip and judgment, not wanting to leave social media completely, I prayed about a way to use this wonderful power for good.  The Spirit inspired me to post for prayer intentions before I went to adoration each week. I was amazed at how many requests I received, and continue to collect even ten years later.  I am still ask on a very regular basis if anyone would like prayer when I am going to adoration.  Though in addition to my status asking, I also include a beautiful picture of our Monstrance with a simple, “Can I pray for you?” Each time I am deluged with over 100 prayer requests. I then bring my phone with me into adoration, open Facebook, and scroll through each and every name bringing them to the foot of the cross and asking the Lord to bless them and all those whose they are interceding for.

As in the prayer of petition, every event and need can become an offering of thanksgiving. The letters of St. Paul often begin and end with thanksgiving, and the Lord Jesus is always present in it: “Give thanks in all circumstances; for this is the will of God in Christ Jesus for you”; “Continue steadfastly in prayer, being watchful in it with thanksgiving.” – CCC 2638
When I first read this paragraph, it really jarred my prayer sensibilities. It just never ever occurred to me to thank God for every circumstance of my life.  Some of those circumstances were horrible and thanking God for them seemed almost ridiculous.  Thank you God for allowing my house to be struck my lightning.  Thank you God for that drunk driver smashing into my car at 7 am in the morning on my way to high school.  Thank you God for my parents’ divorce and the selling of my childhood home.  Thank him? Really?

Yet, there were elements of those most difficult circumstances that were good and I could thank him for them.  In Romans 8:28, St. Paul clarified, at least to me, this paradox a bit more when he writes, “And we know that God causes all things to work together for good to those who love God, to those who are called according to His purpose.”

In all circumstances, we can find something to thank God in; even in the situations that don’t turn out the way we wanted.  The house, was struck but did not burn down and my dad finally put up that metal rod to ground our antenna (clearly this was an incident from 1970-something).  The car I was driving that fateful morning was a big, old, heavy-duty Ford Granada, and the only thing broken in the accident was my nose. Thank you God for sparing my life, and I pray that young man also learned from this harrowing event.  Thank you God that my parents can have peace which trickled down to all of us kids; and I pray our home was a blessing to the many families that inhabited after us.

Praise is the form of prayer which recognizes most immediately that God is God. It lauds God for his own sake and gives him glory, quite beyond what he does, but simply because HE IS. It shares in the blessed happiness of the pure of heart who love God in faith before seeing him in glory. By praise, the Spirit is joined to our spirits to bear witness that we are children of God, testifying to the only Son in whom we are adopted and by whom we glorify the Father. Praise embraces the other forms of prayer and carries them toward him who is its source and goal: the “one God, the Father, from whom are all things and for whom we exist.” – CCC 2639
Many years ago I read a book called The Prayer that Changes Everything by Protestant writer, Stormie Omartian.  At the time, my prayer life was still sporadic and uncomfortable. She speaks of how praise is the prayer that changes your heart, your mood, and your mind. It is the prayer that stops with fear and anxiety and worry in its place and replaces it with the peace of Christ.

It was then I opened the Psalms and started to practice praise using those beautiful songs. From that time forward whenever I find myself struggling with anxiety, sadness or doubt I still turn to music.  Contemporary Christian music has taught me how to praise and worship God when I have no words or even desire to pray.  Music can fill my heart, it is a wonderful way to praise the Lord, much like David and his Psalms.

3. Our Guinea Pig Had a Household Chore –joy of nine9

4. Worth Revisiting: A Daughter’s Love | Theologyisav

6. Do We Really Want to Change? | Franciscanmom

7. A Life of No Regrets | Tony Agnesi

10. Confessions From A CP Adult | Most Usually Unusual

12. There Are No Shortcuts