#WorthRevisit Do You Want To Be Well (Gospel Reflection) 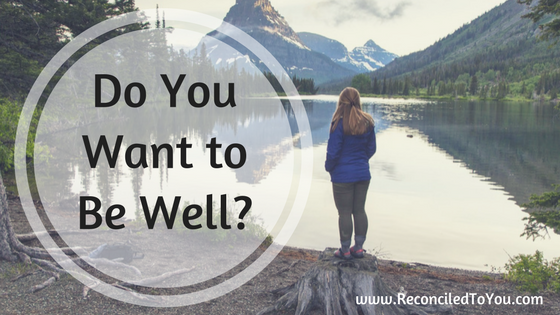 When Jesus saw him lying there and knew that he had been ill for a long time, he said to him,
“Do you want to be well?”
The sick man answered him,
“Sir, I have no one to put me into the pool
when the water is stirred up;
while I am on my way,
someone else gets down there before me.”
Jesus said to him, “Rise, take up your mat, and walk.”
Immediately the man became well,
took up his mat, and walked.  ~ John 5

There are so many ways we can be sick — physically, emotionally, mentally, spiritually. We even use the word to refer to being fed up with something. Most people do not wish to or like to be sick. As a working mother, I am often heard saying that old cliche, “I don’t have time to be sick.”

As a “germaphobe”, I take my dislike for being ‘out of commission’ with any type of ailment to a whole new level. Some, primarily my dear hubby, have even implied my fear teeters on neurotic. I can’t really argue that. The irony is, for a very long period of my life, I would have welcomed illness because it gave me a valid excuse to give into my insecurities and fears. I would have happily taken a day or two on the couch with my tissues, soup and favorite book, instead of facing the world. Sick was sometimes convenient and sometimes comforting because nothing was expected of me in that condition.

When We Are Ready to be Well

It would seem obvious that the man in today’s Gospel did not wish to remain unwell, if he was laying so close to this place that promised him healing. Though, he does seem to have a few excuses as why he hasn’t taken advantage of this cure for the last 38 years. As I contemplated why he had not simply asked another to person to help him or devised a way to get in a better position for receiving the healing, I thought of that fearful time in my life.  That time when change seemed almost as overwhelming and scary as remaining in my current condition. I remembered how my pride prevented me from reaching out to anyone for help, not wanting to blow my ‘I have it altogether’ image.

How hard it can be to enlist another person’s assistance, especially when it means admitting — out loud — that you cannot help yourself. How frightening this step can be, especially when you wonder if you’ll be turned down or disappointed by that person after you have muster the strength to ask. Will they, like Jesus, be willing to risk everything, to be God’s instrument of saving grace?

When I finally reached the point I knew it was time to be well. I also knew it was time to turn to Jesus.  I returned tothe Sacraments of Reconciliation and Eucharist (both in Mass and inAdoration). As the days passed, I began to feel nudge of the Spirit in my heart asking me, “Do you want to be well?”  Answering “yes”, had to first came with the recognition that the healing was coming from Him (in whatever form He choose to send it) and made it possible to finally accept it.

“Immediately the man became well, took up his mat, and walked.”

2. Worth Revisiting: Leading with Humility – Theology

3. Harvesting The Fruits of Contemplation : Wo

4. Do You Want To Be Well (Gospel Reflection)

7. The Kingdom of God is at Hand: Abandoning Our Nets

8. The Vocation of Marriage | Hail Marry

9. How I Was Set Free From the Darkness of Depression

13. Walking the Path: Only Say the Word