#WorthRevisit: How I Cope with Ad/hd & Anxiety

Why All the Squirrels?

The squirrel obsession sort of happened by happy accident – or perhaps it was divine providence because of a funny friend. See, my Attention Deficit / Hyperactive Disorder tends to manifest outwardly in two significant ways. First, I have an enormous amount of energy (though a bit less with every passing year). I always have a million projects being tackled and I require very little sleep. Second, keeping me focused on a single topic at a time or present in the moment can be quite the challenge at times.  I have the proverbial attention span of a – you guessed it – a squirrel.   The squirrel connection was cemented after my good (and funny) friend Laure posted the following clip from the movie, Up, on my Facebook wall:

Ad/hd as an Asset

My Ad/hd went diagnosed throughout my childhood and young adulthood.  Unfortunately, that resulted in some major self-esteem issues, among other things we’ll be discussing in this series in the weeks to come.  The realization that I was blessed (and it is a blessing) with Attention Deficit/Hyperactive Disorder came in my early thirties when I was a young mother and an early childhood educator. My oldest was showing signs of Ad/hd so I began researching to learn more about the signs and symptoms.  I started with the book, Driven to Distraction by Ed Hallowell, in an audio version on cassette from the library. Clue number one this wasn’t just about my son should have been my reliance on audiobooks to finish books as staying focused reading has always been one of my biggest challenges.

I will  never forget having to pull over and rewind the cassette to re-listen to Dr. Hallowell list the 15 possible symptoms of Ad/hd.  I took out a scrap piece of paper from my purse and counted up, not my son’s symptoms, but mine!   At that time, I could identify presently displaying or having displayed 13 of the 15!  I was shocked.  Believe it or not, it had never even crossed my mind that I had Ad/hd.  That is the day I became an expert, literally.

One of the most interesting aspects of Ad/hd that I discovered during my research was it rarely stands alone, there is almost always another co-existing (also called co-morbid) condition.  In my case, the predominant co-morbid condition is anxiety.  I am a world champion Worry-Wart.  I have also had bouts of depression over my lifetime as well.

In 2006, after many years as a lukewarm or fallen-away Catholic, I had a major reversion.  During that year, I discovered prayer and the Scriptures and over the following years rediscovered the Sacraments.  This grace trifecta has not only invigorated my spiritual life but provided me many amazing tools for living peacefully and even joyfully with Attention Deficit / Hyperactive Disorder and Anxiety.

Over the next ten weeks, my desire is to not only educate on the different aspects of Ad/hd and anxiety but also provide some practical and spiritual tips on embracing the blessing of a life with these conditions.  As I look back on the last 20 years of my life, it amazes me where God has brought me — from scattered squirrel to spiritual, a little less scattered, squirrel.  My desire for this series is to reach back into the time of my life when I was an expert on Ad/hd in Early Education (and by my own struggle in Adulthood as well). A time when I was speaking and teaching on the educational aspect of this subject and incorporate it with how my Catholic faith helps me live with ad/hd and anxiety every single day.

You are invited to the Inlinkz link party!

Disclaimer: Affiliate links used in this article, benefit the ministry but cause you no harm. 🙂

Other Places You’ll Find Me: 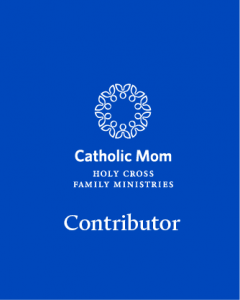